They are just a bunch of gabbers having fun

The hard core of rave culture 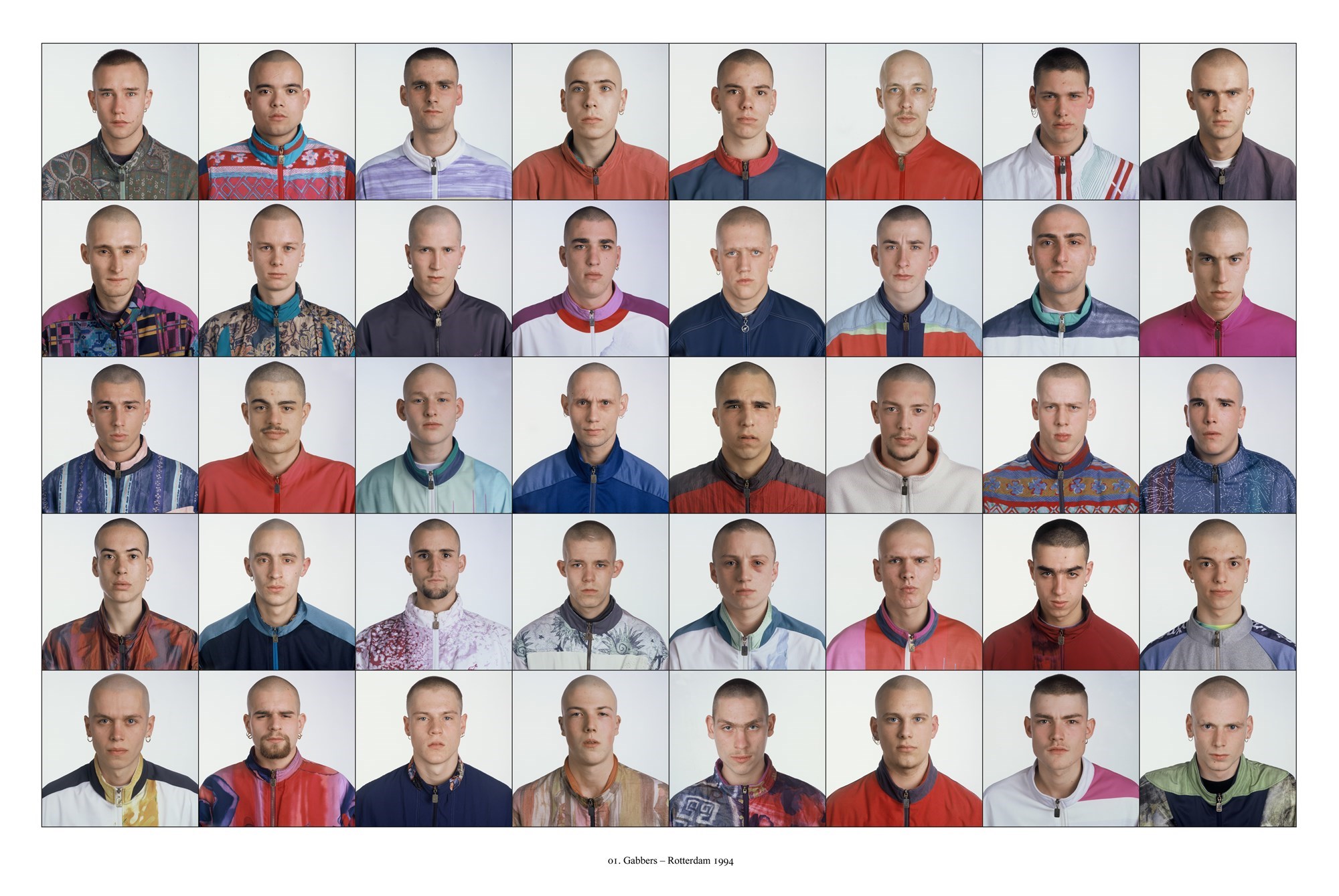 As the first feature in Pathological Empathy dedicated to tribes, we examine one of the biggest youth cultures of the early mid 90’s.

They are referred to as the strongest dancing mind of a post-rave happy hardcore techno called “The Gabbers.”
In an attempt to build an understanding and recognising the signals of what it means to be a constant survival, finding our packs and becoming part of social order, we aim to decode the roots of this tribe, learning its underlying complexity, philosophy, motivations and fears.

Tremendous series of sounds gathered a large group of kids looking for an escape from the new found loss generated by their expanding industrial cities and numb by radical and fast changes. Simon Reynolds author of Energy Flash describes their music as an ultra-fast super-aggressive form of hardcore techno developed by the Dutch in the early nineties, which has since spread as an underground sound throughout the world. Famous for their ear-splitting sound the sub-genre techno music was born in the early-mid 90’s in Northern Europe and was concentrated in Rotterdam, the Netherlands and Scotland. The word comes from a slang term in Yiddish word “chaver” meaning “buddy” or “pal”.

Originally the “Gabba” referred to a rebellion sound. Speed is one of the central words in describing its beginnings, centred around the music; the beat is believed to come as a response to the rave culture.

The subculture first emerges as a form of necessity to make faster stronger beats leaving aside the sounds heard in the rave culture. London at that time (1990 - 1994) played Ardkore while Amsterdam focussed on Acid Houses. The Gabber beat consists of insanely fast tempos ranging from 180 to 250 bpm, and they are meant to celebrate the celebration– The Gabber kids celebrated the weekends with nervous systems high on speed and ready to exploit the beat. 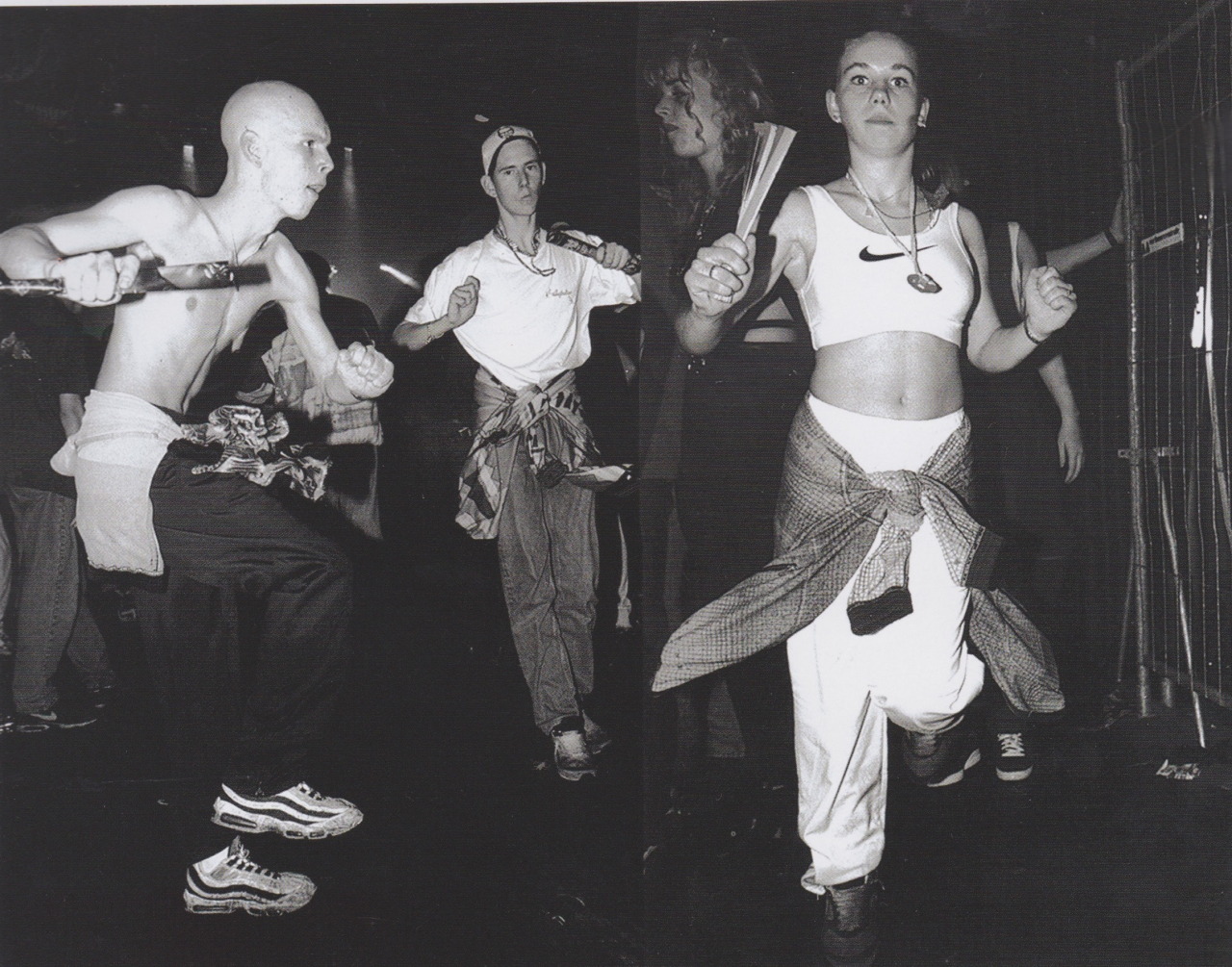 To accelerate the rate of noise, dance, and to push their bodies to their limits, Gabbers determined that the maximum feeling to break the night with their dance needed to be euphoric, rambunctious and energetic, hence their reliance on speed. Reynolds portrays them and their beats as “all down to ecstasy and amphetamine, it is music for the sensation-junkie, for kids reared on Nintendo, Hellraiser, Manga comics, and Freddie Krueger”.

It is important to highlight that their reliance on speed did not project an aggressive or intimidating vibe, these kids are self- absorbed almost at the point of autism, lost in music and mayhem. Thanks to the birth of this music ritual, the dancing became one of their main distinctive signatures. It was so overwhelmingly strong that at some point they were called “Nazi Gabbers” or “Nazi techno”. This collective jouissance, euphoria, thrill out of nothing, and for no apparent reason, excluded them from their surroundings and paved the way to the name “Rotterdam kids”.

The “Collectiveness” of the sound system, drugs and dance made them establish a connection; all induce in a crowd experience. Jeremy Gilbert and Ewan Pearson, authors of Discographies:

Dance, Music, Culture and the Politics sound, thought that such totalitarianism is by definition one of the possible consequences of the collective pursuit of ego-loss. They believed that this observation should serve to remind us that the politics of the ecstatic experience is always dependent on its specific modes and contexts. These contexts are a reflection of the struggle of the Dutch kids in Rotterdam at that time, finding this music with this composition of the crowd the imagery became a statement.

Philosophy (The Culture of Consolation)

The Gabbers collective experience awoke a militarization of music and imagery. The science fiction writer Bruce Sterling coined the term: military/ entertainment complex– the way technological spin-offs from military research feed into leisure industry and video-games to virtual reality. This complex touched upon a key element of this tribe philosophy: the influence of video games and escapism.
For instance, a Gabber club comprises a space full of lights, lasers, noise and beat booms which made the kids feel inside a video game fighting the music in an amplified euphoria that included a pleasuredome and a terrordome bursting with track titles like “Dominator” “Iron Man” “The Endzone.”

I feel like I’m inside a forcefield, my flesh seared and irradiated with demonic energy.

From a subcultural point of view, Simon Reynolds defined them as: “the hard core of rave culture, working class kids from inner city estates and suburban Nowheresville who live for the weekend.” People in this tribe consisted of white working class youth crushed by the heavy industry changes, facing unemployment. “Gabba expresses the rage and frustration of “White Niggaz” with bad attitudes and no projects. They are despised by middle-class critics who simply don’t understand the mentality of those who crave music to go mental.” according to Reynolds.

This perplexity is quickly detangled when considering the suburbanization trend that seeped through Rotterdam at the time. In the early nineties, low-to-middle income and unemployed families were forcefully pushed toward the urban peripheries with high-density satellite towns making surrounding regions a significant threat.

The city was beaten by the decreasing demand for lower skilled jobs, which contributes to greater increases in unemployment. In the Rotterdam region, the working poor can be seen as strongly urbanised” ( Sako Musterd Gentrification and the suburbanization of poverty: changing urban geographies through boom and bust periods.) This fast urbanisation meant for the kids a rapid change, and they were designated by Amsterdam’s shadow with DJ Elstak gabber anthem called “Where the fuck is Amsterdam?”.

The series of events and pressure involved in this working class environment gave them a masculinist music, which meant strength, portraying their faith in the happy hardcore beats, “It is a working class scene, there’s no pseudo- intellectual element” says techno head’s, Michael Wells. “People respond on a gut level. The apocalyptic, sci-fi and horror movie imagery in Gabba, it is all part of the trash culture here kids are into. It is a reaction against the pressure of modern life.”

That role is arguably is a kind of safety-valve/social-control mechanism, with youth living in the temporary utopia of the, loved- up weekend rather than investing their idealism in a long-term collective project of political change – explains Reynolds.

The pressure they ought to handle turned the speed they consumed a provider of a feeling that they were actually running away, having that in thousands of kids at the same time amazed everybody.

Speed-freak youth are literally running away from their problems, and who can blame them?

Belonging to a working class community, the simplicity was a message against opulence and the outfits were perfect for rave and dancing the whole night. Sportive, streetwear attire, skinhead hybrid “Whether you like it or not they really did have a style there. Going around with a shaven Gabber head and those candy colours, legendary. Those Gabber bitches keep looking sharper, those shaven necks, so cool to see” said Ari Versluis Dutch author of “Exactitudes” photographer documentary of youth cultures. 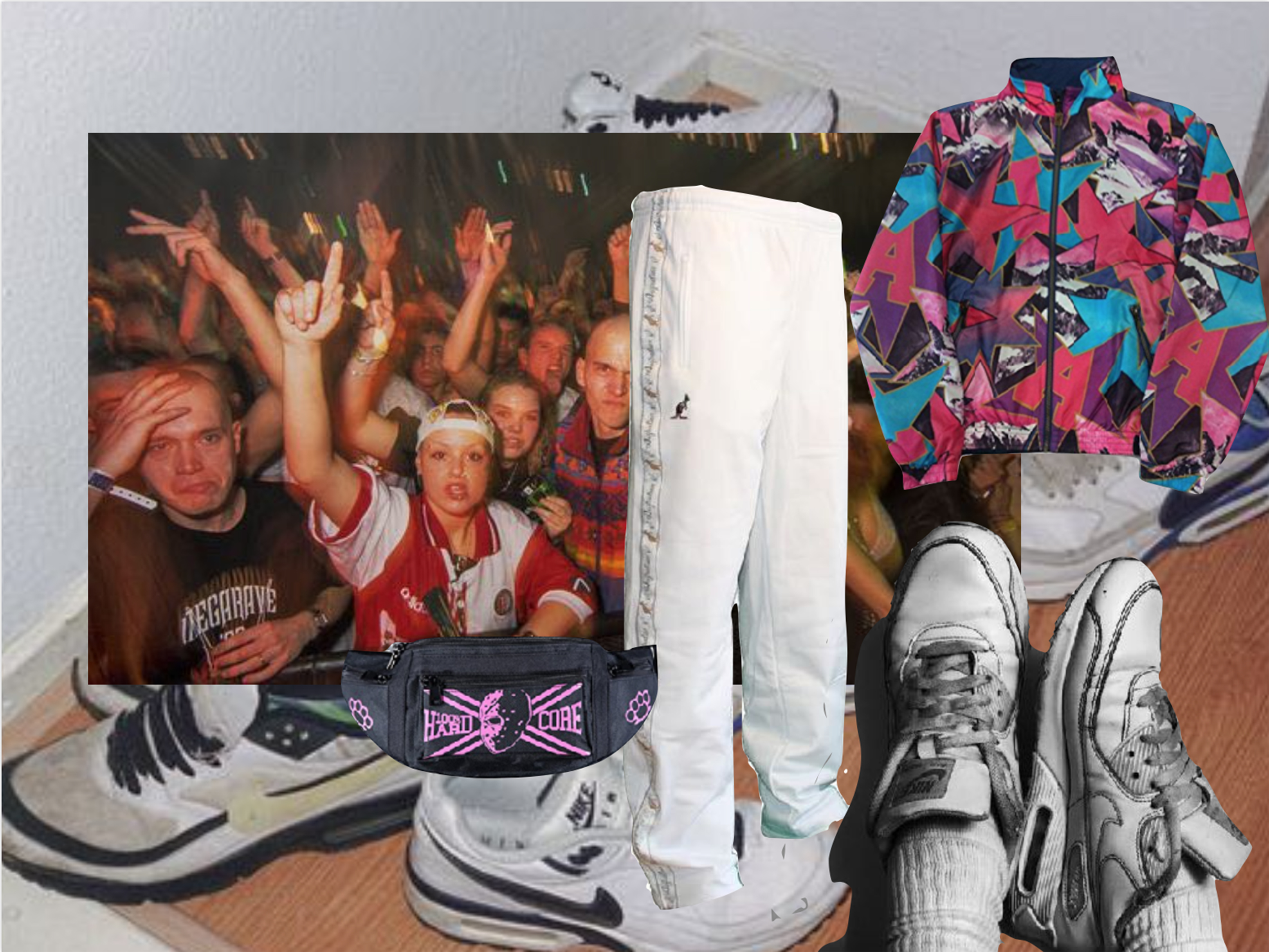 Source: Images inside the collage from gabbereleganza.tumblr.com 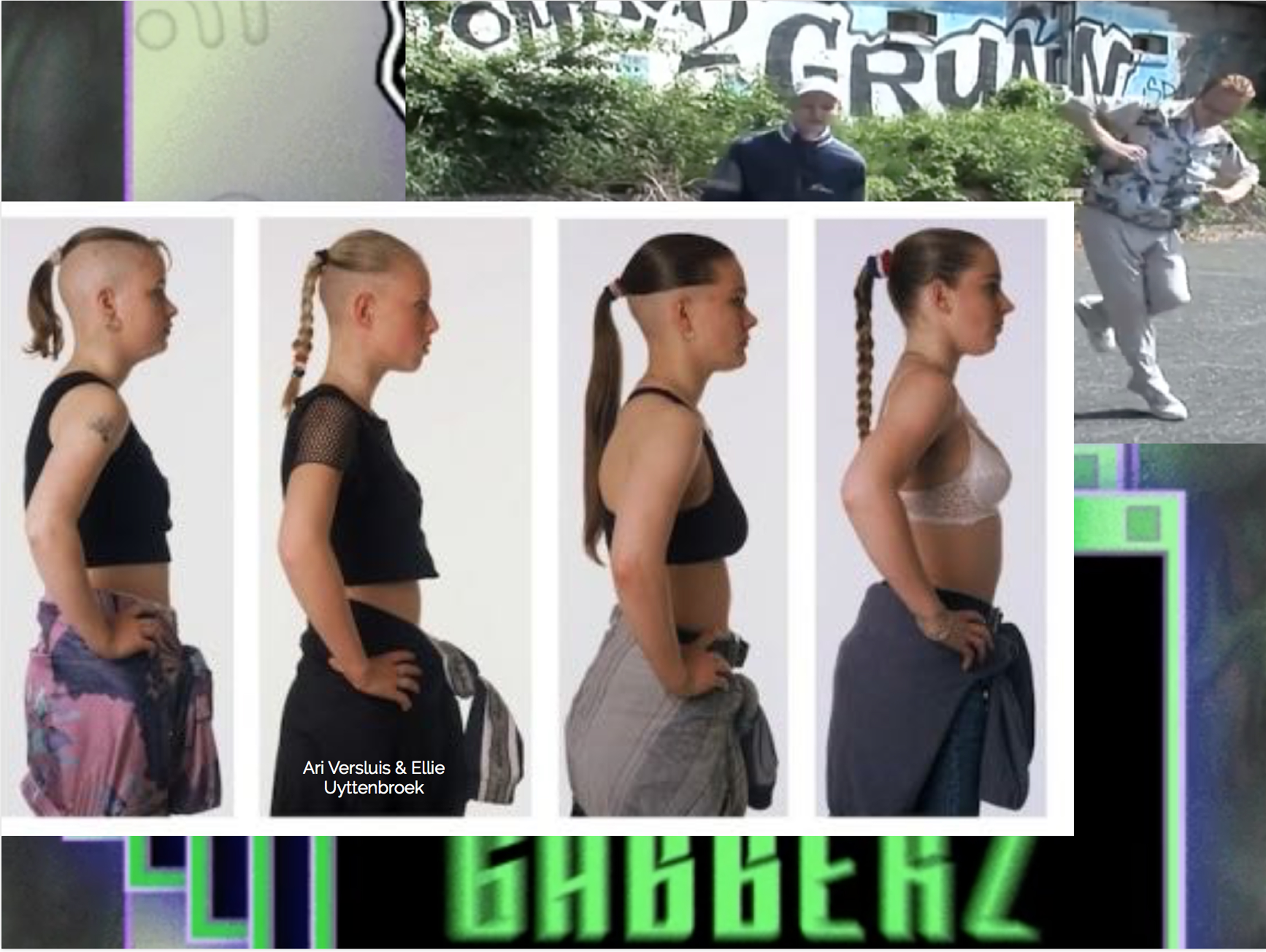 Source: Images inside the collage from “Exactitudes” by Photographer Ari Versluis and profiler Ellie Uyttenbroek. and gabbereleganza.tumblr.com

Ponytail dangling over a shaved patch of scalp from the ears right round the back of the head.

The role of fashion brands in forming subcultures

Brands are seen as partners and loyal companions in our pursuit of identity and adopting them generates codes of recognition. In this case, Gabbers adopted Nike and Australian Triacetat Pants to represented their aesthetic codes. Objects that later evolved into trends and later settled as classics. Today, these items encapsulate a feeling of relief, a message of endurance, a simple look that projects leisure statements of completing a look of freedom, enjoyment, mobility and uniformity. A reminder that we will live forever impregnated, embracing brands and making them ours with a sense of belonging. 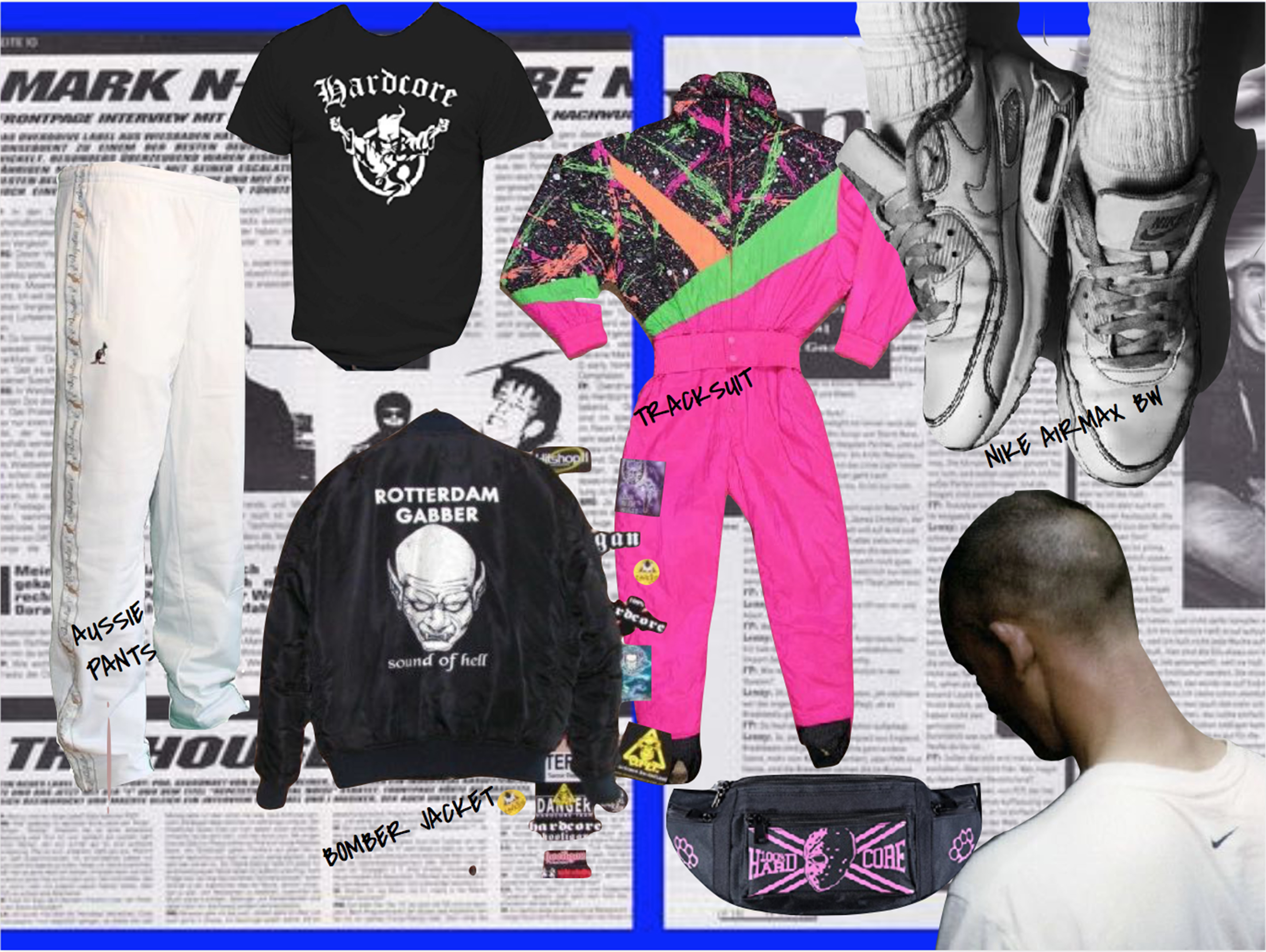 Branding is a profound manifestation of the human condition. It is about belonging to a tribe, to a religion, to a family. Branding demonstrates a sense of belonging. It has his function for both the people who are part of the same group and also for the people who don’t belong – Wally Ollins Co-founder Wolffs Olins.

The importance of the reinterpretation from contemporary fashion designers 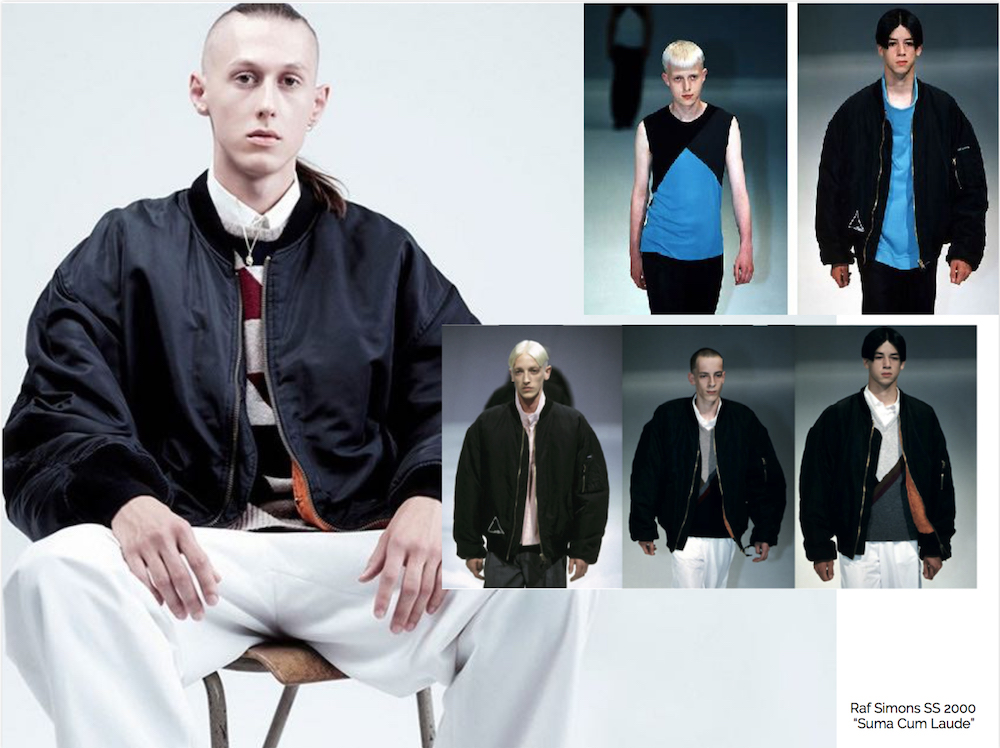 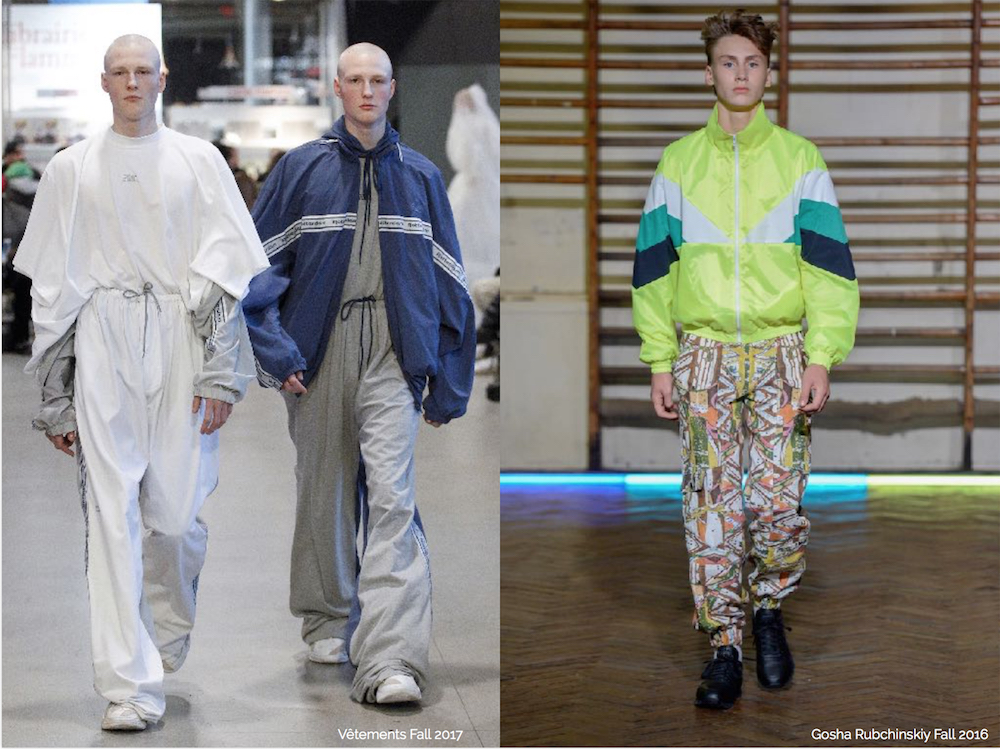 Adopting the Gabber Boy look, while understandably is a form of appropriation, could still signify you as part of the tribe. Even though the look is composed of quite simple items, its message of youthful defiant strength is what left designers such as Raf Simons, Demna Gvsalia and Gosha Rubchinskiy mesmerised. What hooked them was not the aesthetic value of the Gabbers’ dress, they fell for the philosophy, energy and admirations for the youth culture.

The popularity of this today is an exact reinterpretation of the first days of gabber manifestation, the tracksuits, colour jackets and what we know as “sportive attire”. These designers completely understand the meaning and lifestyle that these items represent, the rawness of the realness of a huge march into insanity to become sane, the manifestation of identity and individuality of the youth culture embracing these reality killers. The importance of the reinterpretation is to transfer not only the aesthetic values but also the philosophy behind the tribe.

The sound of Gabbers today still exist not as strong as they once did in the 90’s in Rotterdam, however, the magnitude of the sound was so big that they stay in different rave clubs from London to France to Italy and Rotterdam. The “Number One Rave Club· based in Brescia, Italy for example shape a lot of Italian working class kids that felt empathy for the music and the philosophy dance escape after the big boom of the original Gabbers in Rotterdam. Thanks of the coding reinterpretation of today we have the opportunity to feel a bit of that power of youth, the born of a subculture that became a global phenomenon.

Think about that again when you are buying your bombers, pants and Nike Air Max BW and please “Don’t touch that Stereo!”